From a distance, they looked like two lovers on holiday. They breakfasted on the veranda together, held hands as they strolled along the beach, and when they looked at each other, well, then it seemed set in stone. It wasn’t just desire in their eyes; it was a deep and intense understanding and admiration of the other. It was only in the moments when they were alone, preparing themselves for bed or the start of a new day that the small elephant sat back down in the corner of the room. Marius would watch Mira combing out her hair after a shower and longed to slip the towel from its precarious position above her breasts. But he didn’t. He still wasn’t sure if that would be what she wanted, too. And she would watch him slide his body into a t-shirt and a pair of pants, admiring the musculature that vanished beneath the cloth. She liked the careful yet carefree way he tidied his hair and face each morning, and found nothing imperfect about his physique. But they both felt as if they were dancing in a dream, and at anytime, the song would end. The perfect blue of the ocean, the caressing warmth of the early spring, and the endless supply of food and drink seemed to perpetuate the illusion. The question was simple if not terribly impossible to answer: where should they go from here? Both of them felt that, at this age, they should know how to answer, and therefore both kept their lips sealed tightly shut.
“When we get back to Berlin, do you think you’ll stay?” He asked one night as they sat on the balcony. Her head rested on his chest and he held her close. She raised her head and looked back at him. “Of course you’ll travel for your writing, but will you stay, with me?” He asked, very quietly, fearing the possibilities of her response. She laid her head back down and he exhaled. “I’d be rather happy to stay with you,” she answered slowly. He waited for more but nothing else came. All that was left to fill the silence were the crashing waves washing over the nearby shore.
When they arrived back in Berlin, they stood in the living room of Marius’ apartment; Mira looked down at her phone, Marius looked at her, waiting. Finally, she looked up. “Do you think I should send my stuff up from London then?” she asked. He thought he caught an anxious look in her eyes. “I think that’s a great idea, yes,” he replied simply, hoping she would relax. She nodded once. “Right. I’ll get on with it then.”

While she telephoned with a shipping service, Marius prepared a tray of snacks complete with a bottle of sparkling Rose. He set it all gently down on the coffee table and began flicking through his work email account which had been abandoned for five days while they had been in Spain. He poured himself a glass of wine and busied himself with drinking industriously and scrolling systematically. “It’ll arrive tomorrow afternoon,” she said, bringing him back from cyber land. “That’s great news. I’ll make space in the closet for you,” he said, smiling over at her.

“Erm, yea, or I could I just, you know, stuff it all in the guest bedroom closet.”

“Mira, I’m happy to make all the space you need. Don’t you want to share space with me?”

She felt a bit ridiculous and began to blush. “I, yes, I do. I just, well. I don’t exactly fucking know how to really. It just feels so odd to…move into your flat again. Obviously it’s not the same one as before. But, still.”

“Alright. Fair enough. I understand. But, this time, we’re much older and much wiser. And hopefully you won’t leave me for the beauty of Switzerland or anywhere else.” He took her hand gently and smiled. She leaned her forehead against his, breathing deeply. He smelled wonderful. Comforting. “I can’t believe this Marius. Sometimes I still just can’t. I mean, what if it really should be Lila here all along?” she murmured, speaking to the floor.

“Mira, I didn’t leave Lila because we didn’t make a good match. We did. But I’ve loved you since I told you the first time a million years ago. After awhile I didn’t realize it anymore, but it was always there.”

She was quiet, examining the lines on the palms of her hands, before laughing a little. “I’m too old for this shit,” she commented, looking up to meet his eyes with hers. He smiled and squeezed her hand.

She took up a book and he seated himself at the piano, beginning to plunk around, tinkering with a new melody. As usual when he played, she found herself unable to concentrate on anything else but the music lofting from the mechanism that was the grand piano. She looked round the spacious room and frowned slightly. She would need to mark out a place of her own; somewhere where she could spread out and do some proper work. She couldn’t imagine sharing a workspace with Marius. In fact, it was difficult for her to get her head around the concept of sharing any type of space with anyone after so many years of solitary accommodation. But, the longer she sat, taking in the music as it filled every molecule in the room with the purest sound, she realized that there was likely no better atmosphere to share with another human. This peace, this comfort; she would remain as long as it did. For surely, she thought, this would be a wonderful soundtrack to write to everyday. Surely, indeed.

“I’m sorry Lila, I was afraid. I was just fucking afraid.” “I already know that Marius. Tell me something I don’t know.”

“I really wish I could.”

Lila snorted and shook her head, a cloud of smoke circling her head from the cigarette.

“It was a shitty thing to do. From both of you.”

“I know. Believe me, I feel just as terrible as Mira does.”

“You should.” She took another drag and flicked the ash from the end. “I already know its over Marius. So don’t think you’re going to let me down easy.”

“I’ve never thought you a fool Lila, and I didn’t come to make excuses for my behavior. I just needed to face you when I said that I am truly sorry that I hurt you. I did love you, you know. And I still do care for you very much.”

“I wish you didn’t Marius. And I wish I didn’t feel the same.”

He reached over and gave her hand a squeeze. She looked down at the floor, then slowly into his eyes.

“Take care Lila. I wish you all the very best. Wirklich.”

She nodded once, solemnly, and he stood up, his eyes lingering on the divine creature sitting there at the bistro table, blonde hair spilling across her shoulder like fresh tears on a cheek. She afforded him the curtesy of the last image being one of her completely pulled together before he turned away and wandered out of the restaurant. After that, she drank her wine in silence, thinking of nothing.

As she unlocked her bike, feeling the affects of the wine take root in her brain, her vision blurred as her conscious and sub-conscious cracked together, breaking forth in a violent storm of tears and sobs, wracking her so much that she nearly had to abandon her bike at the post where it was chained and take the walk of shame home; a one woman parade of melancholy.

****************
Die Emotionen Von Menschen spiegeln die Laune der Natur wider. “Human emotion reflects that of nature.” Something Marius had said a long time ago, almost in another life. Looking out over the sun and surf of the Atlantic Ocean, I pondered the truth of such an expression and found it to be accurate. “Don’t tell me you keep a flat in London for the wonderful weather,” he had snorted, upon seeing the puzzlement expressed by my knitted brows after he had first said it. “Don’t you notice how dreary people’s moods are when the weather is rainy and bad?” he asked, a smile playing at the corners of his lips. In fact I did notice. But I was never actually in any one place long enough to take matters of climate and weather patterns to heart. I was still mulling over the truth of his words when he mentioned to me that he would not mind visiting England again, he would like to see my mother again. “You tick very well together,” she had said back then. That was the only phrase resembling a compliment that my mother had given me regarding any relationship I had had. Ever.

My computer lay open on the table behind me, the black screen reflecting the palm leaves spread out like a canopy above. What would I write today? How would I be able to explain myself in written words? Would I slip back in time, using nostalgia to come to grips with reality? Or, would I write an anecdote about the prawns I had eaten for lunch and leave the rest to bask in the Spanish sun? A gentle wind blew a sweep of hair across my face; a sea breeze, the winds of change for a sailor. I squinted against the sun which had already began dipping itself into the glossy, glinting depths of the endless ocean. Somewhere behind me, I heard gentle piano music float through the heavy salty air. “Mira,” the voice softly said. “Will you come?” I turned from my perch and slid into the shadows of the interior. The music had grown stronger, now with strings and guitar to accompany the piano’s notes. It told a story, and I as I listened, I realized the story was somehow familiar. “This is wonderful,” I murmured, lost in the timing, the melody, each synchronized harmony. “I wrote it for you,” he said, as softly as if the words belonged to the composition.

For the first time since I had arrived in Berlin, I wept. 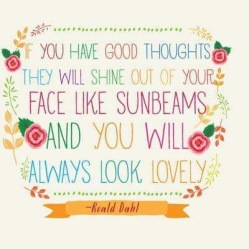 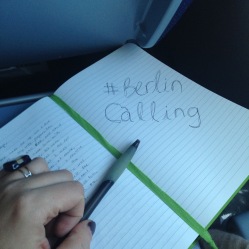 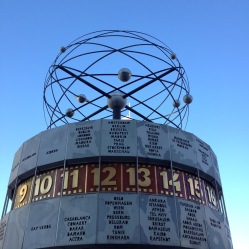